OWs of the period 1960-63 may well remember the modern languages master William Brian ("Willie") Watmough, who I have just discovered passed away in 2013.

He wasn't at the school very long but made his mark as an organiser of amateur dramatics and overseas trips for those wishing to develop their language skills. I came across his obituary in The Cestrian, a newsletter for alumni of Chester College / University of Chester. Chester was his home town and he returned there to teach in 1968 and appears to have spent the rest of his life there.

Obituary in The Cestrian 2013, by Julie Dagnall wrote:Bill Watmough (1968-1991) Bill Watmough retired in March 1991 but maintained his contact with the University for a period of time as a Visiting Lecturer. He passed away after a brief illness. Bill started work at the then Chester College on September 1, 1968 as a Lecturer in the French Department, subsequently gaining promotion to Senior Lecturer in French. In 1971 he was appointed as Hostel Tutor in Exton Park and later served as Hostel Tutor in Bradbury Hostel. In 1977 he spent a term in Germany. Bill was educated in Chester, having attended Cherry Grove Boys’ School and Chester City Grammar School before undertaking two years’ National Service. He gained a BA Degree at the University of Wales – University College, Bangor. Following some time abroad he began his professional career at the Royal Grammar School in High Wycombe, teaching French and German. He had a keen interest in amateur dramatics and in the extra-curricular aspects of language teaching, establishing the French Club and organising visits abroad during vacation periods. He was in charge of the link with the Lycée Jean Durand in Castelnaudary, Aude. 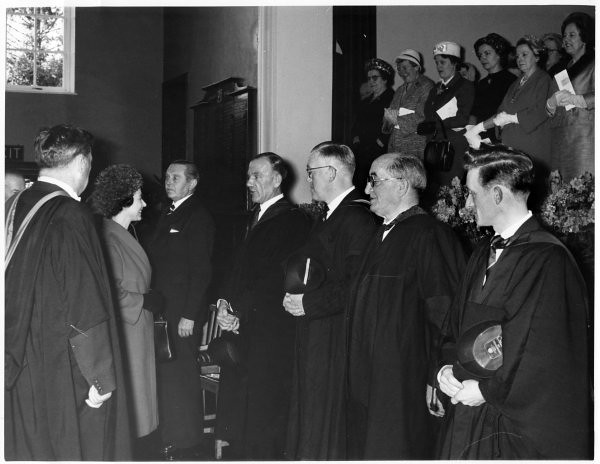 He is on the right of the above photo, being presented to HM The Queen on the occasion of her visit to the RGS.