Share your memories of life at the RGS, stories of masters, etc.
Post Reply
7 posts • Page 1 of 1

Quite a number of OWs have mentioned Uplyme to me in emails, and have been quite nostalgic about the place. Before 1963 it was the name given to the junior school as well as the boarding house of that name. I came upon the following contribution to the Sept 1962 Wycombiensian in which a third-former gives an excellent description of the Uplyme lay-out whilst becoming quite nostalgic about the place even before leaving it for the senior school...

Perhaps you have seen it through a hole in the laurel hedge at the top of Amersham Hill. A dark, dreary, inadequately-lit collection of shacks. However, if you go in you will see the delightful terrapin buildings which are made up of a few slats of wood held together by broken windows. The collective noun for these buildings is “Uplyme” or “Junior School”. As we enter Uplyme territory we are confronted by a large red brick twelfth-century building: this is Uplyme boarding house, recently fitted with beds and cold water appliances. To the right of this is what is called the main block. There are four doors and if we select the right one we see a long narrow passage opening into the hall which contains one honky-tonk piano, used for assembly, and a lectern, both on a raised platform. Surrounding the hall are six classrooms and two staff rooms fully furnished with desks and chairs. Each classroom has less desks and chairs than pupils, but this is only natural. Parallel to the main block are the terrapin buildings, lavishly furnished with enough chairs and desks for all pupils. The two classrooms in the block are equipped with oil-stoves which only work when it is very hot. Opposite the terrapin huts is another block of two classrooms, both of which are obviously meant to be used for developing films and, if the lights are switched on, only one will work. There is an arch joining this block of buildings to another. The arch’s only purpose in life is to fall on the head of any unfortunate mortal who happens to touch it. These buildings are the music rooms containing two pianos which don’t work, one piano organ which doesn’t work, one piano which works sometimes, and another which works but is toned a semitone flat.

Oh, how I long to go up to Main School next year where I can forget all my Uplyme worries! But how sad it is to see Uplyme being replaced by new buildings. After two short years I had grown to love those crumbling shacks, those decrepit desks, and those wonderful silent pianos.

It's amazing how small the hut seems now.
Incidentally the website that hosts these photos seems to be defunct now.
Tony Hare
RGS 1951 - 1956 http://www.rgs.tonyhare.co.uk
Many years as an Electronics Engineer and Gift Shop proprietor and now happily retired and enjoying the opportunity for relaxation and travel with my wife.
Top

Uplyme was previously where the clock and instrument company Ingersoll were evacuated to during the war. It was taken over by the RGS when they moved back to London. I seem to remember going over to Uplyme for music appreciation classes with Mr Rainbow. I remember him playing things to us on a piano which must have worked well enough. I owe him a lot for a lifetime's love of music.
David Wiltshire
Top

Well, where to start? Maybe the first thing that caught my eye this morning was "Does anyone remember Ben Rainbow?" and I do, although not very well. Lou Piner taught me whatever music I knew, but Ben rainbow stood in a few times, as I recall. Later in life, one of my close business friends who heard that I had attended RGS asked if I knew Bernar Rainbow [NB: the name was Bernar, not Bernard, but he was always known as Ben at school]. My friend had studied organ with him at Clifton College, I believe. Trivia note, John Cleese was also at Clifton later on.

But back to Uplyme. Seated in class 2B early in February 1952, we were called to a special meeting in the hall, to be informed by a nearly-tearful Boss Tucker that the King had died. A thousand stories about Uplyme could be told but the most important is that the boarding house where I was privileged to be a member from 1952 to 1958 (after a year in School House) was under the very beneficial eye of Mervyn and Iris Davies. Mervyn (MMD) was the epitome of a caring, decent human being who ensured that all of his flock were treated properly, listened to and generally kept well. House matrons Nessie Mackintyre and Mrs (Maureen?) Connolly were equally capable of and determined to provide care in loco parentis.
Graham (Willie) Watson
Top

A few memories from two years in the junior school at Uplyme(1961-1963) . For the first year I was in 2e, a form room nicely situated to see the masters wandering down from main school and to be ready for their arrival. Also with Boss Tucker taking us for Latin, he was frequently away 'on business', leaving his lessons to some unsuspecting classics sixth form member to 'do' his lesson. I recall that between 2e and 2d next door, the wall was thin at best. In both corners there were growing gaping holes possible, and occasionally put into practice , for a small 'two bug' to crawl through.A far cry from the spending on education buildings today.
In my second year I was in 3A, classroom right next to Holly's so-called office, but with a cloakroom to the rear of the classroom itself, for boys at the back to disappear into during certain lessons eg Tus, but never Ma Chunk's for whom we all had to stand and greet in French when she arrived.
The school year 1962/63 saw the big winter feeeze. We returned after the Chrismas holidays to find Uplyme frozen up, not surprising to those who remember it. The new Junior school was not ready to be occupied and so the 10 classes of the first two years had to be dispersed around the main school. I can't remember where they all went, but I certainly do remember where 3A ended up - UNDER the stage of the school hall, soon to become the second gym, and usually solely occupied by the Model Railway club. Not the easiest entry and descent for ageing teachers. Another form was on the stage itself. With passing years memory dims as to how long this went on for, it seems now to have been for weeks on end , but was probably only for a week or two. I can remember the form trying to act out a Shakespeare play ( Twelfth Night?) for a rather stern english teacher, Mr Ashwell, in the depths of our temporary accommodation. Can't imagine that happening now - the whole school would be closed for weeks.
Mike Saunders
Top

Here's a photo of Lou Piner, from the September 1957 issue of the Wycombiensian... 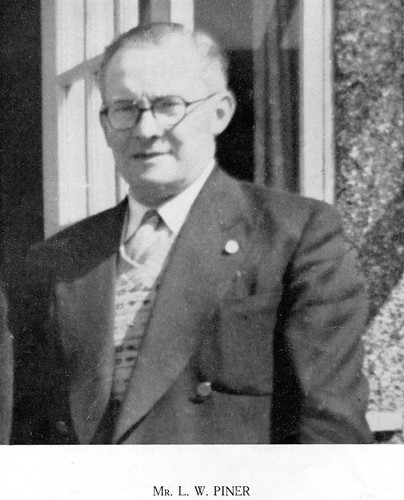 Part 1 of the obituary is that issue...

I have just seen the photos of the main hut at Uplyme on Tony Hare's site. My recollection (I was in Uplyme 1961-63) is the same as his: there were classrooms either side of a central assembly hall, plus an office for Holly and possibly other rooms. If that is right, how could all that possibly have been fitted in the hut shown in the photos? It must have been a lot wider and I wonder therefore if some huts had been demolished when the photos were taken. There was, for example, the Terrapin hut where I spent the year 1962/3 in Form 3Y, that was also home to 3X. If there were 6 classrooms in the main hut and 2 in the Terrapin, where were the other two? I'm wondering if the "main hut" in the photos is not actually another hut that contained two classrooms and that the main hut, as well as the Terrapin, had gone by the time the photos were taken.