A Bit of RGS History

I couldn't make much progress with the 1841 census so abandoned the quest.

A few snippets... 27 May 1843, the RGS headmaster Joshua Finlinson was on a list of people declared insolvent (The Tablet). Sources give his dates as headmaster 1841-42 so it is not entirely clear whether he was still headmaster at the time. The bankruptcy order in the London Gazette suggest that he was still in post for 12 months up to May 1843.

It seems that Finlinson (died 30 June 1876, Peckham), like Arnison, hailed from Penrith in Cumberland. Probably just a coincidence.

His dates at the RGS don't seem to tally here. He married Elizabeth Whittle on 28 June 1831 at Walton on the Hill, Lancashire. At the time of the 1841 census, they were living in Pennington, Leigh, Lancashire, with their six children. So the dates given in the Cantab alumni register (1844-49) for his stint at the RGS looks likely.
John Saunders
RGS 1963-70 (personal website http://www.saund.co.uk)
Top

A snippet I stumbled upon whilst browsing JSTOR...

From Educational Records: II Sources for the History of the English Grammar Schools (Concluded) by W. E. Tate (1954)

British Journal of Educational Studies wrote:That long-suffering soul, the schoolmaster's wife, appears twice. At High Wycombe, 1671, with a note as to the appointment of William Larner vice Philip Humfrey deceased, is a resolution that Larner's widow is to have a payment of £10 in two years 'on condition she does not turn Quaker';...

The author also records in a footnote...

Note wrote:This is the first time I can call to mind of school governors making any kind of pension payment to a schoolmaster's widow.

Another historical titbit, following on from the mention of an OW, E.S. Roper, becoming organist and composer at the Chapel Royal (see p18 of John Mitchell's pictorial history of the school).

The King has appointed Mr Edgar Stanley Roper, B.A., Mus.B. (Cantab.), F.R.C.O., to be Organist, Choirmaster, and Composer at his Majesty's Chapel Royal, St. James's Palace, in the room of the late Dr. Charles Harford Lloyd, M.A., Mus.Doc. The appointment to date from October 17 [1919].

Mr. Roper, who is 40 years of age, was educated at Westminster Abbey School, the Royal Grammar School, High Wycombe, and Corpus Christi College, Cambridge, where he graduated Mus.Bac. in 1903. He studied music under Sir Frederick Bridge, Dr. Walter Alcock, and Dr. E.W. Naylor, and his appointments during the last 16 years have included those of assistant organist at the Chapel Royal, St James's, organist at the Danish Royal Chapel, Marlborough House, professor at Trinity School of Music, conductor at Bermondsey Settlement, and assistant organist at Westminster Abbey. 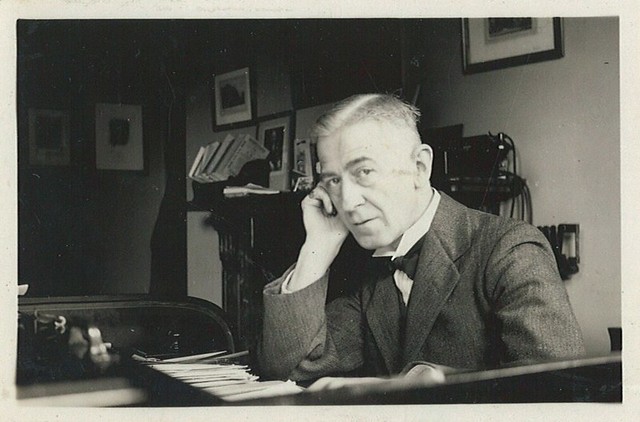 Another titbit, from the Summer 1948 Wycombiensian, about Stanley Roper, who returned to the school to judge a music competition...

A most distinguished Old Boy of the School, Mr. Stanley Roper, C.V.O., M.A., Mus.B., organist and composer to the Chapel Royal, adjudicated the competition held at the end of the Easter Term [1948]. In his general remarks he recalled the absence of music in the School as he remembered it from 1895 when numbers were small and met in the old building near the Rye. His criticism bore directly and kindly upon particular points that everyone could appreciate. He liked especially the variety of instruments and voices. Those boys who expect to compete again found his explanation of the marking system very useful. The ensembles were good evidence of the effect of varied musical activities during the year and reflected increasing enthusiasm in the Houses.

Mr. Roper was delighted to be able to attend a competition at his old school and we were equally delighted to see how music keeps him young in spite of his much travelling up and down the country and about the world. The Headmaster thanked Mr. Roper and expressed his own pleasure also in both the improvement shown by many boys and in the courage and skill shown by those appearing for the first time.

A bit more RGS history, gleaned from a local newspaper...

W. Sproston respectfully informs his Friends and the Public, that having lately enlarged his House, he has Accommodations for a few additional Boarders - Mr. S. at the same time assumes the Liberty to assure his Friends that the same unremitting Attention to the Welfare and Improvement of his Pupils will be continued, by which he has obtained their Approbation and Patronage.

The School will open after the present Recess on Monday the 22d Instant [22 July, 1799]

A short bio of an RGS and Wycombe Wanderers footballer, and his tale of football violence, way back in the 19th century. Forget any notions of the 'Corinthian spirit', this is straight out of the Eric Cantona coaching manual...

Although Mr Harold George Butler's debut for the Hastings Club is comparatively of recent date, he is already regarded as one of the locals' most efficient forward players. This impression doubtless originated on the occasion of the Semi-Final for the Sussex Senior Cup, when, as will be remembered, Brighton Athletic were leagued against the homesters. The match was played at Eastbourne, in the Devonshire Park Ground, and with the arrival of half-time the scoring on both sides was blank. About twenty minutes before time, however, Butler succeeded in notching the first, and what afterwards proved to be the only goal of the match. Since the achievement of this feat, for feat it was, he has always been looked to with great confidence and expectation.

He began his career as a footballer at High Wycombe Grammar School, of which Club he was captain for two seasons. His second Club was West Wycombe, a team renowned for its adroitness on the Hampshire coast. In this eleven he co-operated in the half-line, and although he always showed a distinct liking for forward play, it was not until he became associated with the Bridgewater team that his desire for this particular position was gratified. Here, of course, he found himself in the midst of Rugby football, for which game, by the way, he has never had a keen appreciation. Subsequently he represented Havant, and occasionally served on behalf of the Wycombe Wanderers in the Second Division of the Southern League.

Although he has enjoyed over eight years' experience of first-class football, he has been curiously free from accidents. On one occasion he was the unfortunate subject of a broken thigh, but, on the whole, his career has been singularly barren of such unfortunate events. Last season he came to reside at Hastings, and speedily joined the local Club.

Mr. Butler thinks "football in Hastings is improving, and that the play in our town is of a higher-class description that that to be seen in the majority of other southern towns." In relation to the Sussex Senior Cup competition, Mr. Butler would very much like to see the Hastings and St. Leonards Clubs in the final. He fears, however, that the latter team will be "knocked out" early in the Round. Apropos of the St. Leonards Club, he thinks there should be less ill-feeling between the two institutions, for he says there is certainly room in Hastings and St. Leonards for two teams. He also considers it unfair to regard the St. Leonards Club as a junior institution.

Whilst playing for the High Wycombe Club Mr. Butler witnessed a rather grotesque incident, which I here relate in this own words: "The occasion was a match between the Royal Artillery and High Wycombe, the contest taking place on the latter Club's ground. Our captain unintentionally tripped Riley during the game, and that player was greatly annoyed, and threatened to punch the offending skipper's head. Thereupon the spectators chaffed him, and he, wishing to vent his vengeance of someone, promptly knocked one of the crowd down with a blow from his fist. For this little incident he was suspended from playing for a fortnight."

Again reverting to the Hastings Club, my informant said he thought they had suffered a great loss in the deparure of Siddie Hadden from the Club. They required a good centre-forward, which at present they lacked. It may be added that Mr. Butler has recently come of age, and he measures from head to foot 5ft. 10½in., and turns the scale at 11st. 10lbs. Although earlier in his life he went in for all kinds of recreation, he now confines himself solely to "soccer" in winter, and cycling and tennis in summer. ROVER. 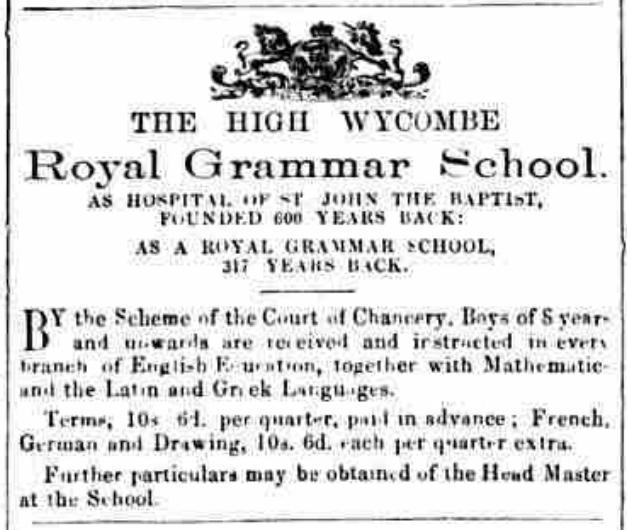 The above is an advert for the school in the South Bucks Free Press, 7 July 1865 . Here is a text transcription:

As Hospital of St John the Baptist
Founded 600 Years Back

As a Royal Grammar School
317 Years Back

By the Scheme of the Court of Chancery. Boys of 8 years and upwards are received and instructed in every branch of English Education, together with Mathematic and the Latin and Greek Languages.

Further particulars may be obtained of the Head Master at the School.

If I have interpreted correctly (please, someone correct me if I am wrong), this means he took his B.A. from Trinity College, Dublin, when he was aged 44 and his M.A. aged 47. This seems remarkably late in life. He had been teaching previous to attending the university, but I think the date given for his start at the RGS is simply a misprint. By all accounts his term as headmaster started in 1852.

Here is James Poulter's entry in the Alumni Dublinenses, a register of everyone who attended or taught at Trinity College between 1593 and 1860, published in 1935 and available to read online here.

A little more on George Peachell.

I received the following message from Ann West, 18 July 2015:

Ann West wrote:George Peachell was the son of my great grandfather, Joseph Robert Peachell. He was the only child from Joseph's first marriage to Mary Elizabeth Woodhead.

I am grateful to Ann for the additional information (which I have also added to the lengthy post with biographical information about Peachell further up the thread).
John Saunders
RGS 1963-70 (personal website http://www.saund.co.uk)
Top
Post Reply
20 posts